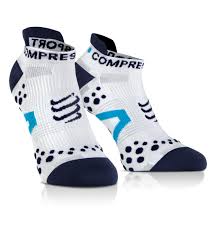 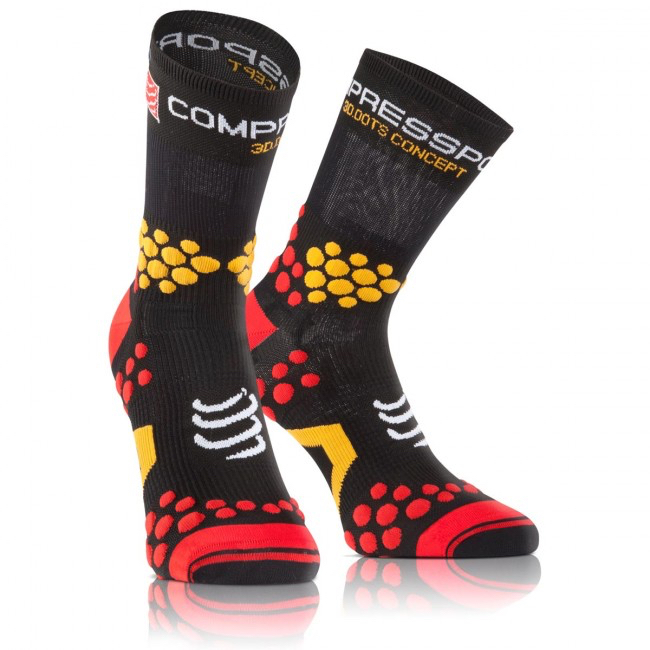 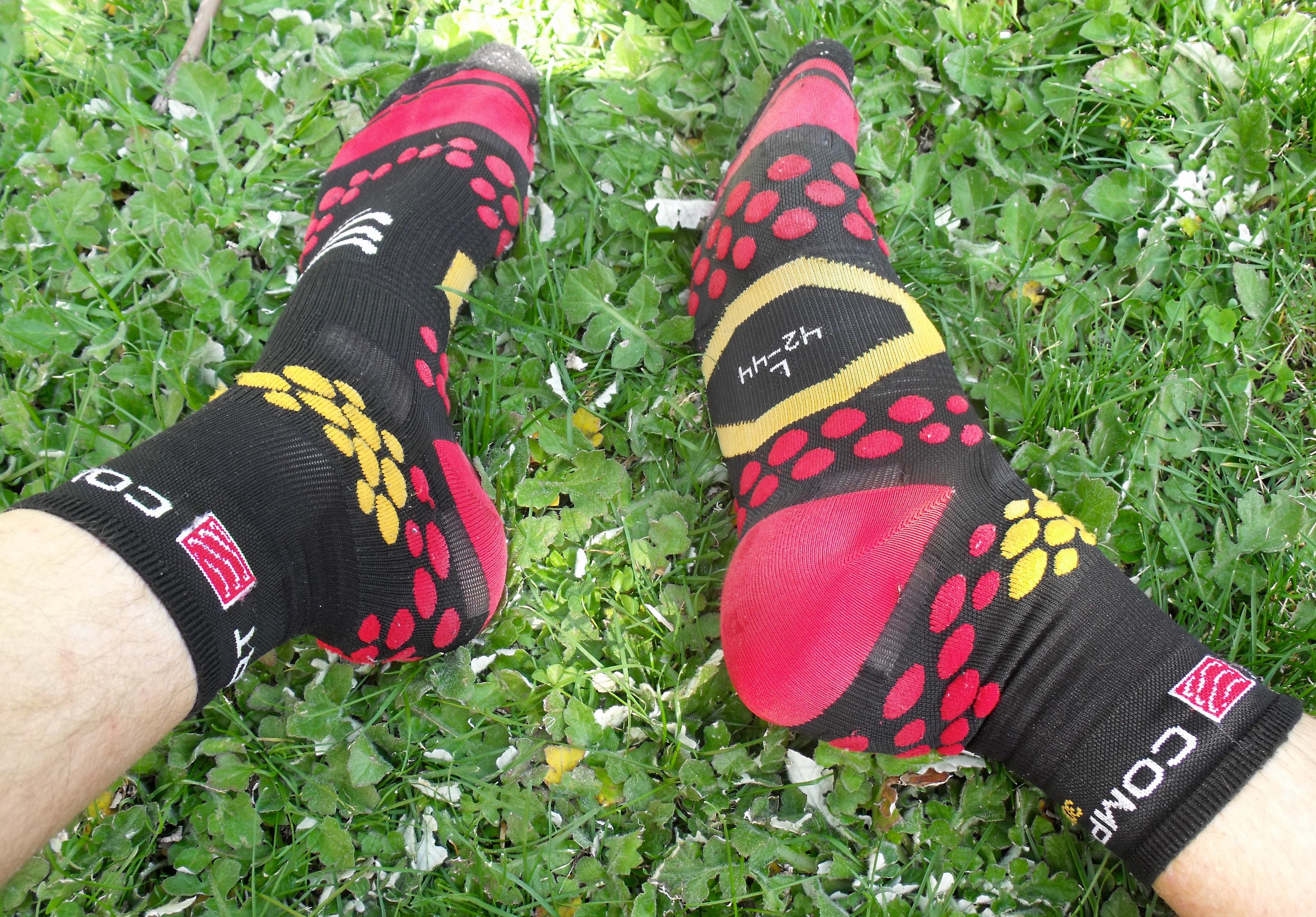 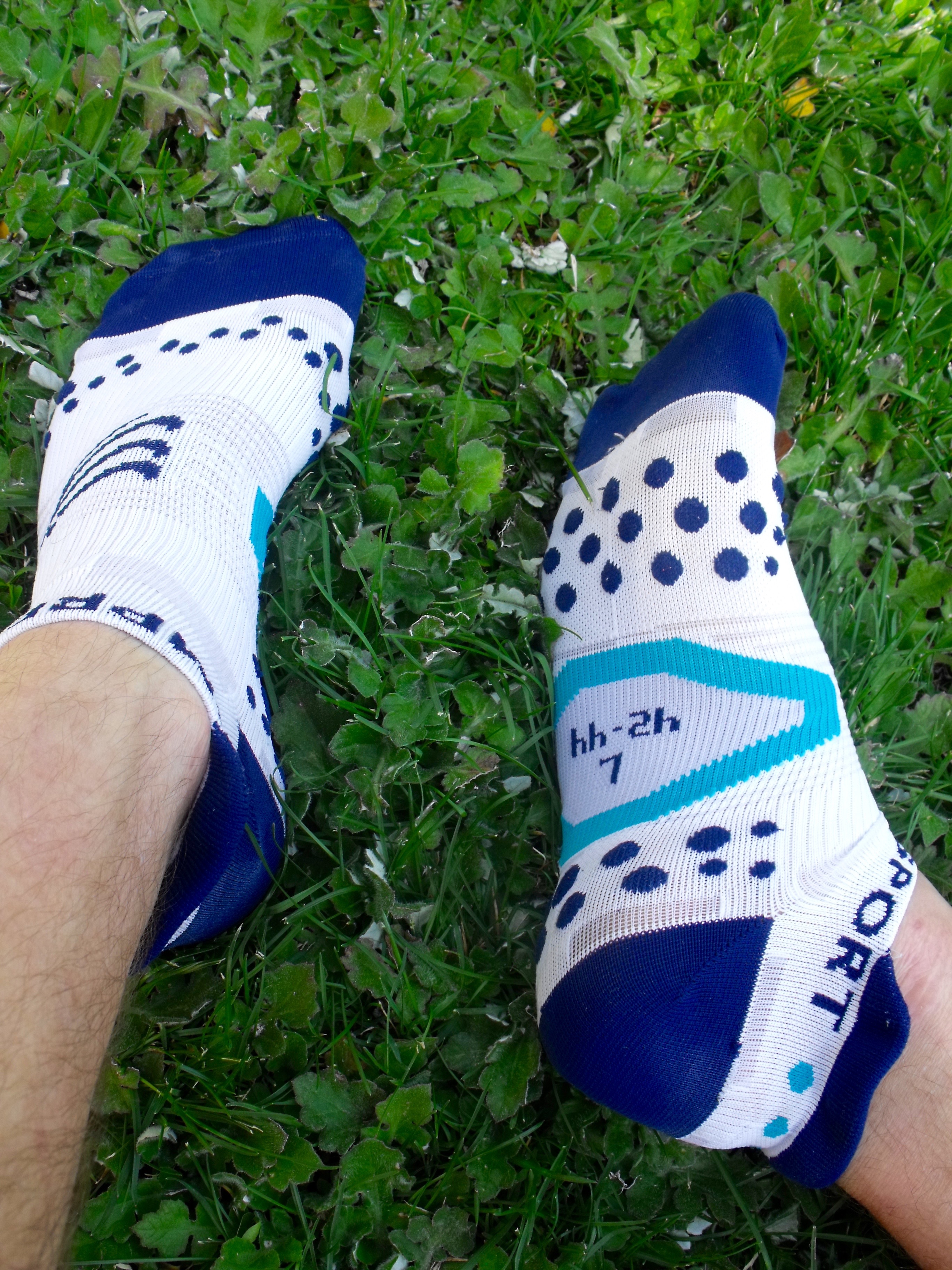 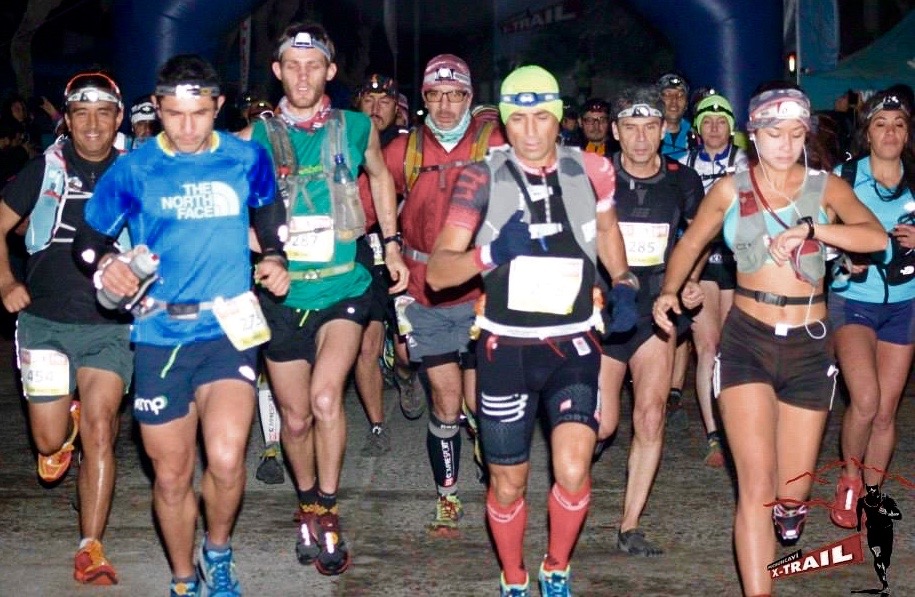 But like all new knowledge, it is is very difficult to comprehend, if it is not understood in context. Last Saturday, at 11:08am, in the last few strides before the finish, it finally sunk in.

5 hours earlier, however, it was a different story altogether. 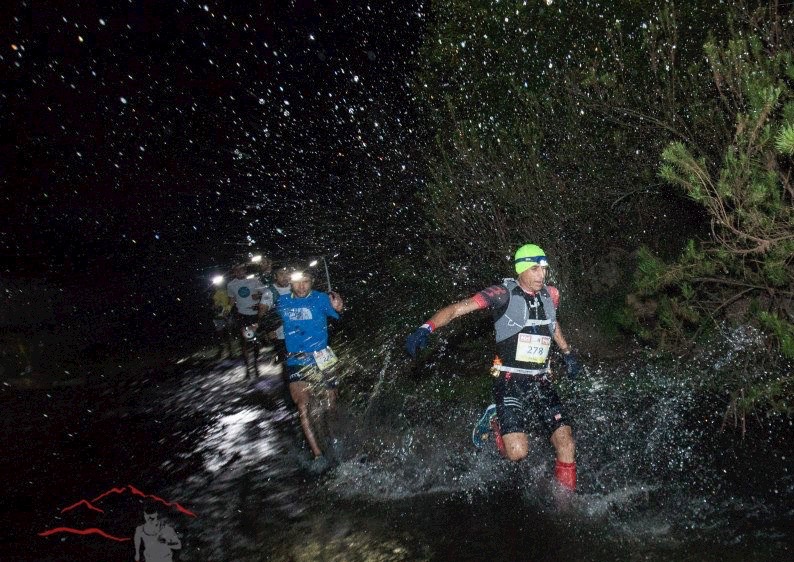 I was running along a sea cliff by headlamp, the invisible waves pounding the rocks below. A cool mist clung to my beard, and the temperate climate and the soft folds of the landscape had me thinking of England, and feeling very far from home.

With only 8km run, now was not the time for such nostalgia however. I needed an empty mind, to gather in the kms before sunrise and foster positive energy for the later stages of the race. But it wasn’t happening. I bimbled along in 8th place, feeling sorry for myself and demotivated.

“How stupid” I thought “to be an ultramarathon runner, and leave behind partners and warm beds and relaxing mornings of good coffee, conversation and reading.” 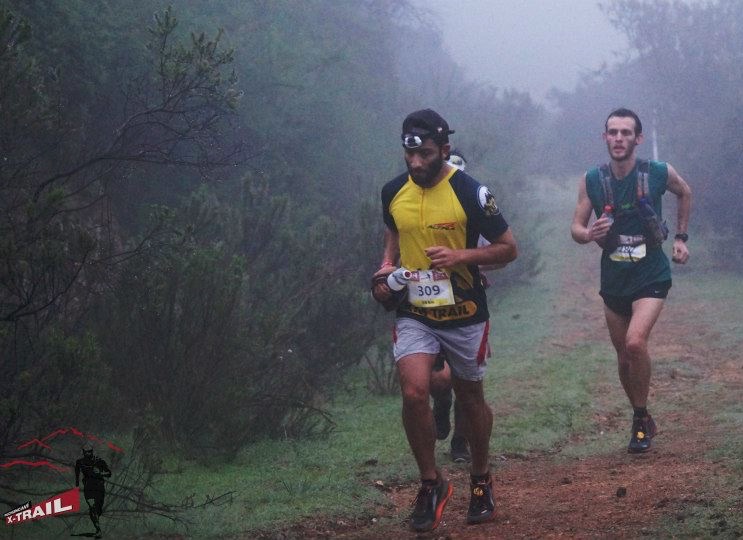 Slowly, the sun rolled across the Argentinean plains and, arriving at the Andes mountains, shot shards of light up its flanks, and into the Chilean sky. Other sensations returned too at daybreak. The smells of the earth mixed with the lavender that I was brushing through. The liquidy swill of the grouse’s call started up from the espino bushes, and the rolling country that I traveled through by night, slowly began to steepen.

I left the last bad vibes in the 20km aid station. Three other runners arrived simultaneously, and we set about the business of breakfast together. I laughed at the gentle jokes directed at the gringo’s expense, and then set off, intent to catch as many Latinos as possible.

A change of mood

Climbing mountains shouldn’t be an Englishman’s forte – not when racing Chileans whose training runs start from an altitude greater than Scafell Pike. But I had grown fond of the thinner air, and spent many long days in the mountains this winter. The climb brought a change in breathing and rhythm, and was a welcome break from the fast, flat pounding of the night. It calmed me down, and emptied my mind. The meat of the event – 15km in the mountains – had started.

The few times that I have had “the flow,” I don’t remember much afterwards. Only fleeting moments. There was Harold Ponce climbing out of La Quebrada wearing his laser stare of concentration. A man in a tin house watching television, who greeted me as I ran past. And then, higher up – floating summits, piercing through clouds, and a waterfall of thick most air, pouring silently over a rock face, far out across the white ocean. 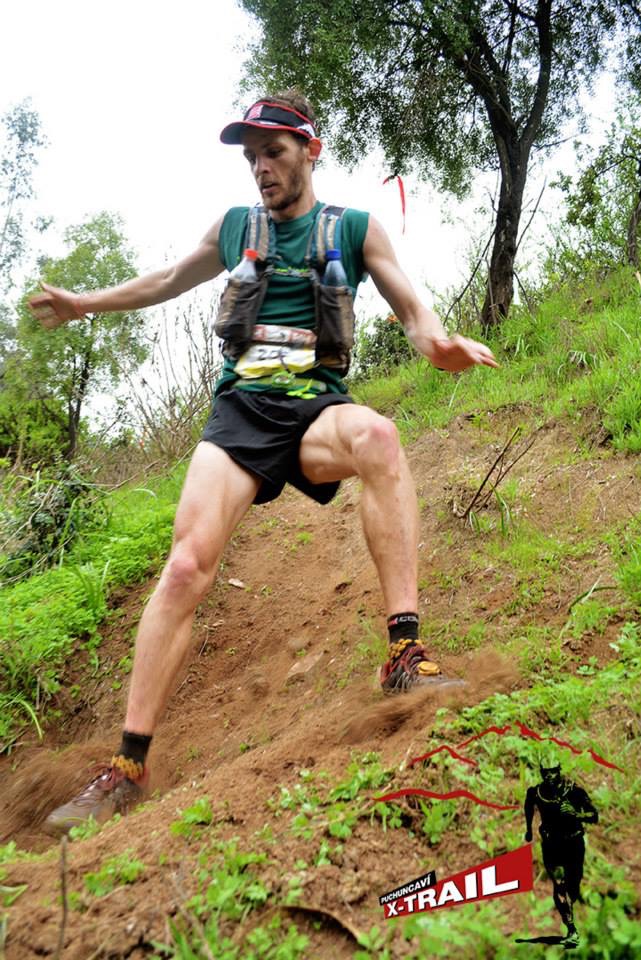 I passed Luis Valle around KM32 and looked around to frame him against the backdrop, and check that I wasn’t imagining it all. There’d be only a few other people on this side of the Andes who’d witness this today, whilst everyone else was reading books and drinking coffee beneath grey clouds on their sedentary Saturday. I laughed at my good luck and my swings in mood, and pushed on.

At Km35 they told me I was in 3rd place. 2nd had a 25minute lead. It was all downhill now. Technical and absorbing, and I threw myself into it aggressively, keen to not be overtaken. I started to whoop and shout, grinding my teeth in pleasure at doing something so simple and hard for so many hours. I ran a few kms with other runners joining the course from their shorter distance race, infecting them with my battle cries as we paced one another noisily to the finish. 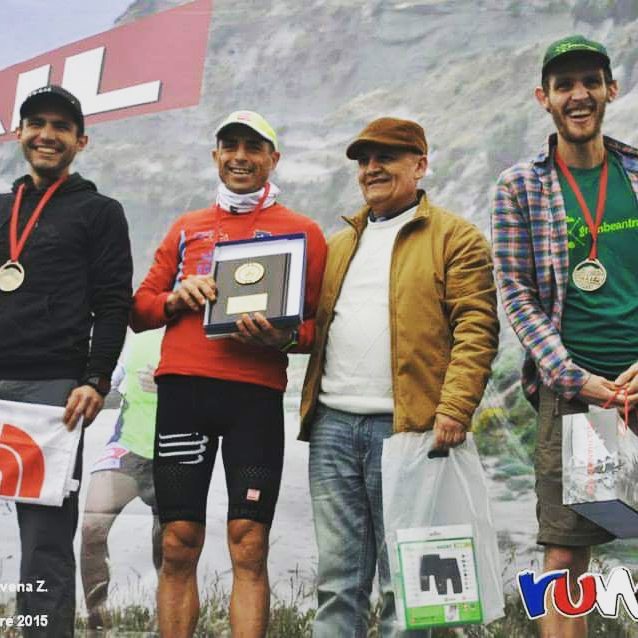 Just outside Puchuncavi, I descended a hillside to a paved road that I was certain would lead to the finish. The organiser, Crisitian Valencia, doesn’t do things by halves however: His route plunging us back into forgotten copses, through fallow fields and along a dry river bed. In truth, the last kms of the race captured the essence of his race: always searching for the perfect line, guiding his adventurers down paths less travelled by and away from their lives quotidian. After crossing the finish I gave him a wild hug. He looked a bit embarrassed to be embraced by such a sweaty and affectionate gringo. But I was positively shaking with the “buena vibra,” and I didn’t have any other words for it.

There was a moment during the Utra Trail du Mont Blanc live coverage this weekend, where we watched the Spaniard Luis Alberto Hernando walking along a mountain path in the Chamonix Valley, closely followed by the American Seth Swanson. The cameraman had been jogging spritely along infront of them for the last 3miles, on the steep dirt trail that lead to the Tete au Vent summit at mile 99. 1,000’s of viewers watched online as Alberto Hernando stopped, cupped his hands and took a slurp from a mountain brook, allowing the American to pass him at a brisk 4mph and move into 2nd place. The commentator, barely able to contain his excitement, declared that this was the equivalent to watching the outdoor Olympics. This strange sport that sees competitors run for as long as 46 hours, peel skin off their blistered feet and vomit by the side of the trail, was suddenly out there, and in the mainstream. 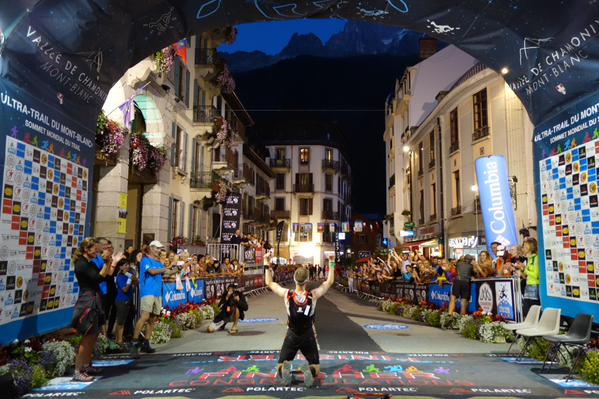 Damian Hall arrives back in Chamonix after lapping the highest mountain in Europe and travelling through France, Italy and Switzerland in a time of 26:41

Success in a 100mile race requires a fervent commitment to training. To tow the start line, the 2,300 competitors needed to have completed a minimum three events of 60+miles during the last 18months. Some runners will have completed more, preferring to train for the UTMB with lots of regular “shorter” events – where you run just a couple of marathons at a time. Others prefer to slog it out in training runs, spending 10 or more hours each weekend in the mountains. An exact formula for success in this multi sport refuses to be pinned down however. When the tape dropped on Chamonix’s high street last Friday at 6pm French time, the fortunes of the sport’s most shining lights were cast to the wind.

The challenges of this race are immense. Of the 5 runners that lead to the half way point, only 1 of them finished the race. Unfamiliarity with the terrain, poor shoe choice, over heating, dehydration, inability to hold down food and open wounds sustained on the trail led to many competitors retiring. For all but the most elite, two consecutive night of running were to be expected. During this time, the body enters such extreme states of fatigue that vivid hallucinations are experienced and runners fall asleep on their feet.

Besides the physical fatigue, the mental strain is soul-sucking. When the sun sets on a second day of non-stop running, and there are still 3 mountain passes to go on your bipedal trip through France, Switzerland and Italy, no amount of saucisson sec and cheese is going to get you to the finish. The desire to have done with the race is enormous. The lack of stimulation during the night that follows, where your world is reduced to a single beam of light, pushes competitors deeper still into their dark places, and it it easy to question the need to keep going.

Ultramarthon running is a very far cry from the marginal gain sport of professional cycling, or the style and finesse of elite level swimming. If this really is the closest we can get to an outdoor Olympics, and the sport’s popularity is to continue to grow, new audiences are going to have to adapt to the ultramarathon freak show format, and take a live broadcast vomit in their stride.