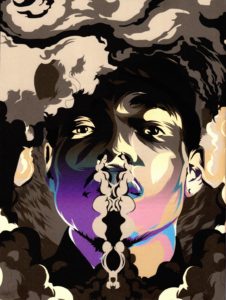 At 6am on March 30th I will pedal away fromMorden Underground station at the southern terminus of the Northern Line. Over the next six hours I will visit each of the 33 consecutive stations on the Northern Line by bicycle, finishing in High Barnet, N.London.

On the top tube of my bicycle will be a black carbon (diesel emission) monitor; by my throat will be a sampling tube and mounted on the pannier rack at the back will be a sign, “Did you know that cycling exposes you to less air pollution than buses, cars or trains?”

The WHO reported in November 2016 that air pollution currently causes 6.5 million early deaths a year. That is double the number of people lost to HIV/Aids, tuberculosis and malaria combined. In London nearly 9,500 people die early each year due to long-term exposure to air pollution – that’s twice as many as died during the Great Smog of 1952.

Air pollution data has been recorded by KCL for the entire London Underground lines. The black carbon monitor provided by KCL is expected to provide data during the ride, presenting the case that swapping your Underground journey for a bicycle will reduce your exposure to air pollution.

I am a journalist; not a researcher or policy maker. But I hope and continue to believe that seemingly small and insignificant acts by individuals can be a powerful tool to draw awareness to this elephant in our atmosphere. From starting points like these we can also draw collected consciousness to tackling climate change as well.

I would be delighted if any other keen cyclists would like to participate. Join me at 6am this Thursday at Morden Underground. Mike’s Bike Surgery (just a stone’s throw from Morden Underground) will be serving coffee from just before 6am. You will need a bicycle and an air pollution mask if you have one.

Find the Northern Line Overground route here: https://www.strava.com/routes/8042325
Or send me an email at matthewNmaynard@gmail.com if you would like the GPX file. 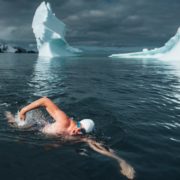 In December 2016 I met Lewis Pugh – British maritime lawyer and UN Patron of the Oceans – at Santiago airport, after his latest hypothermic Antarctic swim. The previous week he had been swimming at Half Moon island to raise awareness of climate change and the need to protect our oceans.

This article for Outside magazine online includes details from Pugh and insights from his personal doctor about how he survives the sub zero salt water temperatures.

(My indepth interview with the swimmer about his environmental work and the signing of the Ross Sea agreement will be featured in Geographical magazine October issue.)

In 2016 I spent five months in Chile’s coastal and cultural capital, Valparaíso.

Walking the streets and by interviewing locals I wrote the feature and shot the photos for the January issue of Geographical magazine. The first page of the investigative story about the UNESCO status of the city; how it is being developed and who benefits from it is readable below.

You can read it below. When you’re ready, click the downward arrrow and scroll to the next page