The small mountain refugio fell silent. It was dark outside in the Cajon del Maipo canyon. 6000metre mountains cut pitch-black silhouettes across a deep mauve sky.  Lucas, a 20 year old local kayak instructor, had just finished talking to a group of visiting university students. This morning, the dentists, engineers, doctors and geologists in training  had bussed 100km from Santiago, following the Maipo River upstream. Tonight, the nearby Alto Maipo dam construction project at the head of the valley was the subject of Lucas’ talk.

Dogged by criticism of the partiality of its environmental impact assessment –– the 531 MW Alto Maipo dam has been a highly controversial  project since its inception. Plans to syphon the electricity it will produce for mining rather than domestic use has deepened divisions. Perhaps most controversial is the substantial diversion of water flow that Alto Maipo’s 67km run-of-river tunnelling will divert from agriculture and touristic activities – essential to the communities the university students drove past this morning – before returning the water for domestic use on the outskirts of Santiago.

Polemics aside (problems perhaps left for the the social scientists, activists, NGOs and soon to be out of work kayak instructors), little attention has been given to the physical processes in the surrounding mountains that will keep the turbines churning. 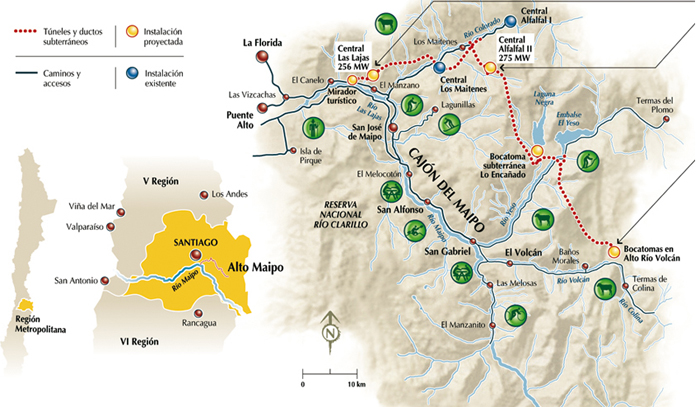 The run of river project will collect water from three Andean rivers that converge in Cajon del Mapio valley to make the River Maipo, instead diverting it 39km through underground tunnels to the 275MW terminal at Central Alfalfal. Further water is collected here from the river Rio Colorado, flowing another 28km  before reaching the 267MW terminal at Central Las Lajas. Finally the water will be returned to the River Maipo river for domestic use in Santiago.  At least, that’s the plan.

Glacier melt is a key contributor of drinking water for the city of Santiago (Bodin, Rojas and Brenning, 2019). Turn on the tap, and you fill your glass with a liquid that just a few days before belonged to a millennial body of ice. Yet glacier retreat in the central Chilean Andes (in the zone of the Alto Maipo project) in the last 51 years is estimated to be as high as 20% (Magrin et al., 2014). Rising temperatures in the Andes means the zero degrees isotherm moves higher. This has two effects. Firstly, low-angled glaciers are being gobbled up. (Steeper glaciers that cross more isotherms are more resilient to rising temperatures). Secondly, rain during winter months is falling higher on the mountains where snow once accumulated. The cumulative effect of these melting phenomena in the central Chilean Andes  is the current hydrological event known as “peak water.”

Whilst water levels are currently high, ever increasing global CO2eq emissions mean we will soon have little or no long-term glacier mass left to tide us over in the summer months. Nor will there will be sufficient seasonal snow melt from the previous winter. So whilst the rivers are at peak water today, current flow rates should not be extrapolated to predict the water supply for tomorrow. Analysis of river flow across the border in neighbouring Mendoza province shows a reduction of river flow of up to 11% once the glaciers are gone (Schwank et al., 2014). Ice, and more temporal seasonal snow, are the major sources of water for Santiago (Le Quesne et al., 2009). Yet in the Alto Maipo Environmental Evaluation, this blogger could not find the words cambio climático (climate change) used once. The AES GENER Alto Maipo project leader, with their slogan energía confiable “energy you can trust” – might just need to rethink that tagline.

Additionally, Alto Maipo’s own construction project work may even be adversely affecting the glaciers they will rely on for energy generation. Dust raised from construction and drilling at the 2500m elevation construction site, as well as black carbon emissions from the lorries working at altitude, are transported by thermal air currents and can be deposited on glaciers. Like a white t-shirt in the sun, bodies of ice are usually good at reflecting heat. But by darkening the surface – even with microscopic contaminants – we are lowering the albedo of glaciers, and increasing their melt rate. 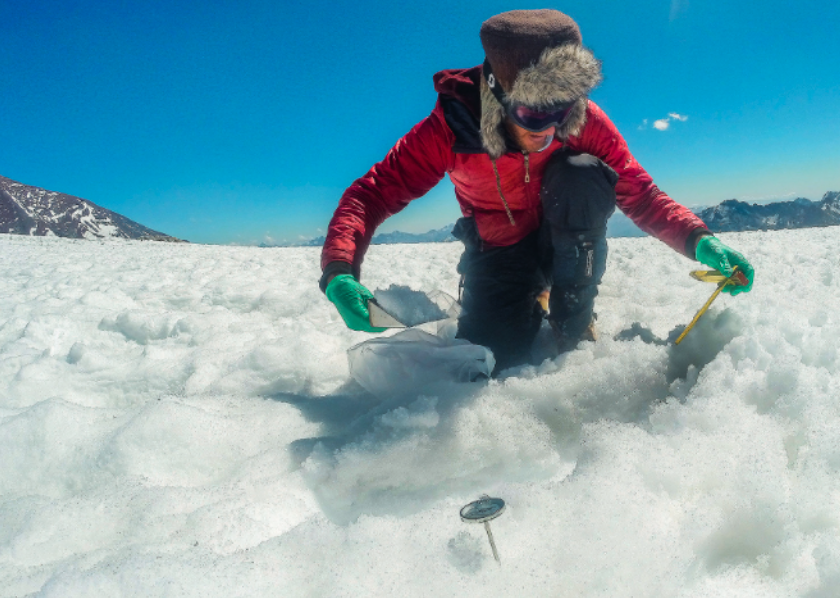 The silence lingered long in the packed refugio after Lucas finished speaking. With any climate and energy conundrum, the need for medium-to-long term climate mitigating renewable energy production on a national and international level; needs to be carefully weighed against consideration of immediate impact on local ecosystems, livelihoods and fresh water access. This blogger would add to these nested issues the careful consideration of the lifespan of a project, especially when its effects are so far reaching for third parties.

To break the silence, Alto Maipo needs to demonstrate clear understanding of models of changing hydrological scenarios for  future water supply and engage in candid conversation with the Cajon del Maipo community about how this affects the viability of their project.